﻿Brief History of the AOH Hibernian Pipes and Drums﻿ 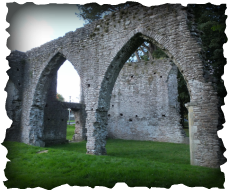 Armagh, Northern Ireland
The Hibernian Pipes and Drums were organized in the fall of 1998. With the help of the Ancient Order of Hibernians from Manchester, NH and Watertown, MA, the band was able to purchase kilts using the Irish National tartan as the basic element of our uniform. Though the band uses Manchester, NH as its home base, its members come not only from the state of New Hampshire but also members are from Maine and Massachusetts. The founding members of the band were George Smith, Chieftain, Patrick Boyle, Pipe Major, Mike Mone, Dan O'Neill, Sean Markey and Dan Gilday. With the recent passing of our Chieftain George, Ruthie Smith is our present Chieftain. Recently, Claire Mullin volunteered to take the position of Drum Major and Kevin Boyle is Drum Sargeant. Jack Kelleher is our Pipe Sargeant and music arranger. The band has grown from a handful of musicians to over thirty playing members plus several students, ranging in age from fourteen years to over seventy years old. 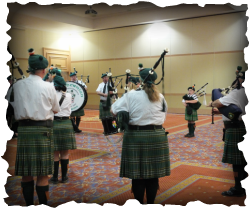 Warming up before a performance
The band has performed at a variety of functions over the years. We have performed in all the New England states, except for Connecticut.. We have also travelled to Pictou, Nova Scotia, Montreal, Quebec, for St. Patrick's and Canada's Irish Festival in Miramichi, New Brunswick, Canada. We have taken two trips to Ireland, in 2008 and 2012.The group performed in Armagh, Derry, Derrynoose, Newry, Keady and Monaghan, Northern Ireland. We also played in Dublin, Ireland and Carfinn, Scotland. Highlights of our performances include performing at the military tattoo at West Point Military Academy, and the Tartan Day Parade(2002) in New York City.

Playing at the dedication ceremony in Keady, Northern Ireland
In 2012, the band was invited to play at the dedication of the Tommy Makem Performing Arts Center in Keady, Northern Ireland. Though Tommy was born in Ireland, his family immigrated to the United States and settled in Dover, NH. The Performing Arts Center is meant  to be a source for the promotion of Irish culture and music.