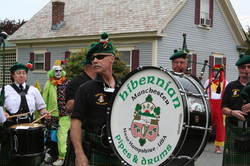 The Bass Drum In a Pipe and Drum Band

Marching percussion instruments are specially designed to be played while moving. This is achieved by attaching the drum(s) to a special harness (also called a carrier or rack) worn by the drummer. The drums are designed and tuned for maximum articulation and projection of sound, as marching activities are almost always outdoors or in large interior spaces. Articulation is paramount to producing a "clean" sound from all the drummers in the line. These instruments are used by marching bands, drum and bugle corps, indoor percussion ensembles, and pipe bands. A marching percussion ensemble is frequently known as a drumline or battery. Most degrees of ability come from a Drumline not only to play well, but to play well and fast.

Bass drums used by modern ensembles come in a variety of sizes, with a 14-inch (360 mm) "universal" depth, and diameter measured in 2-inch (51mm) increments from 14 to 36 inches (910 mm). The heads of these drums are usually made of a smooth white PET film, which gives a tonality that is mid-way between clear and coated heads. Unlike tenors and snares, bass drums are mounted so that the cylindrical shell of the drum is mounted on the player's harness and the two drumheads of the drum face out sideways. The player can then play on both heads, one arm for a drumhead on either side. Many groups try to use the largest size bass drum that is comfortable to carry, using the fact that larger people are generally more able to carry a bigger drum for long periods of time.

Pipe bands and some traditional groups use a single bass drummer, who typically carries the pulse of the group. The bass drums used by pipe bands have seen an increase in size and more of a focus on tone in recent times. Typical sizes range from 12 to 18 inches (460 mm) by 28 inches (710 mm). The goal is to produced a subtle deep tone which is usually in tune with the drones of the bagpipe. Various muffling techniques (sometimes referred to as "treatments") can be used on bass
drums to achieve a desired sound. The most common of these involve applying foam weatherstripping, either on the head directly or on the shell of the drum. Some drumhead manufacturers make heads that are "pre-muffled." These heads usually have separate pieces of PET film or
other material which are set into the head's flesh hoop and touch the head to control overtones.

The bass drum sets the tempo for the band's performance. It is the largest drum in pipe band use, and is carried by a collar around the neck, or by a more modern shoulder brace, which is less unkind to the player.  The bass drummer uses padded sticks, and flourishes them between strokes on the drum, adding to the colour and movement of the pipe band performance.

Information gathered from Wikipedia http://en.wikipedia.org and other sources.